Have you ever seen a movie where a child was raised by animals? I mean movies like Tarzan and the likes.

You might think that all that happened in the movie was all fiction that it can’t happen in the real world, but all these happens really. These child raised by animals are usually called feral child or wild child.

A feral child (also called wild child) is a human child who has lived isolated from human contact from a very young age, and so has had little or no experience of human care, behaviour or human language. Feral children lack the basic skills that are normally learned humans, for example, they may have trouble learning to walk upright after walking on fours all their lives or display a complete lack of interest in the human activity around them. They often seem mentally impaired and have almost insurmountable trouble learning a human language.

So as you’ve now known what a feral child means, i will be listing six children who were ferals. 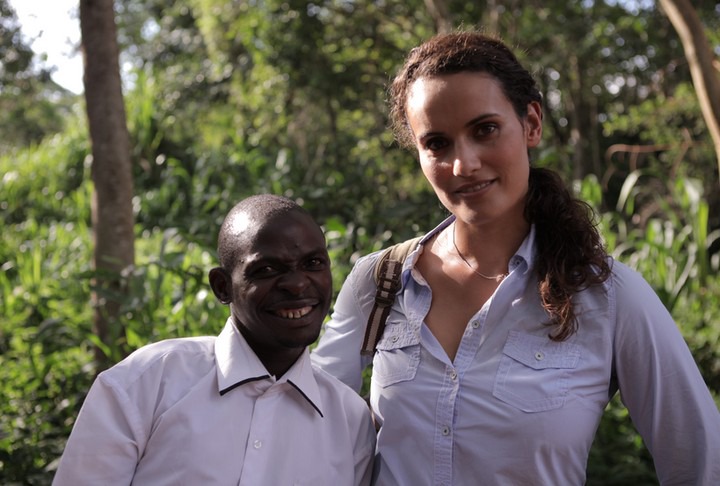 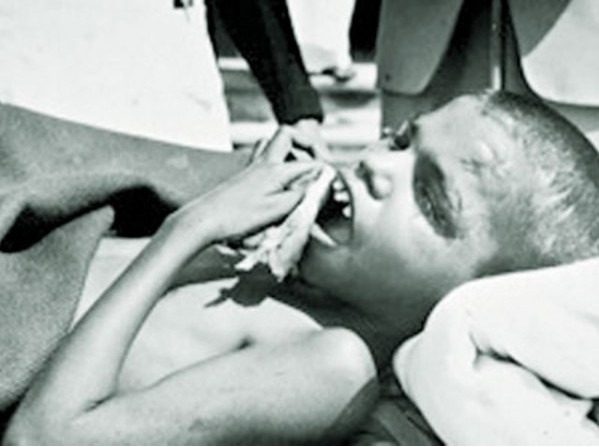 John Ssebunya was born in the early 1980s, but ran away from home, aged around three after seeing his mother murdered by his own father. John was found by a woman called Millie in 1991, hiding in a tree among monkeys. She returned with menfolk from the village to save John but John resist capture with the help of the monkeys coming to his defence, throwing sticks at the villagers.

Once captured and cleaned up, he had scars and wounds all over his body, with his knees scarred from crawling, he was identified as John Ssebunya. He was given into the care of Paul and Molly Wasswa, who runs a charitable foundation for orphans. He couldn’t talk or cry initially but has gradually learned to speak. This suggests that he may have learned some speech before his stay in the wild among the monkeys.

John can now talk, sings, and tours with the Pearl of Africa children’s choir. John was the subject of the BBC documentary Living Proof, screened on 13th of October 1999. 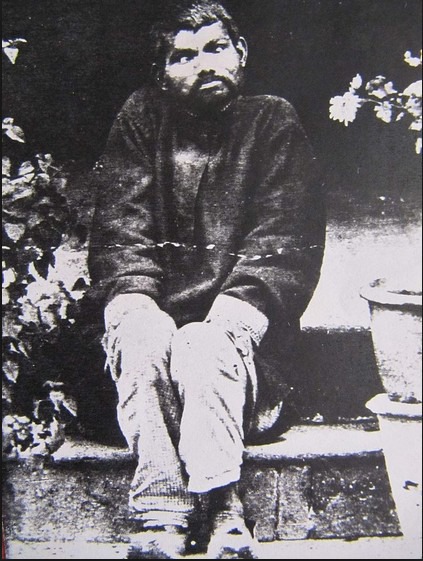 Dina Sanichar was removed from a wolves’ cave in 1867 when he was about six years old. Dina Sanichar was first found when hunters in the jungles of Bulandshahr were surprised to see a boy follow a wolf into her den, running on all fours limbs. The hunters then smoked out the wolf and her companion out of the den and shot the wolf. Then they brought Dina with them. Dina reportedly exhibited all the habits of a wild animal, tearing off clothes and eating food from the ground. He was eventually weaned off from raw meat to cooked meat but he never learns to speak. He apparently became addicted to tobacco and died in 1895.

Daniel was found in the Andes, Peru, in 1990, and was said to have been raised by goats for eight years. He was reported to have survived by drinking goat milk and eating roots and berries. Living in the wild, he developed obvious feral characteristics.

After being found, Daniel was investigated by a team from Kansas University (The University of Kansas or Kansas State University) and named Daniel because he was formerly referred to as The Andes Goat Boy. 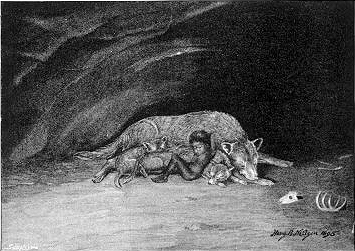 Kamala and Amala are one of the most interesting cases of feral children. These wolf girls were about 18 months (Amala) and eight years old (Kamala) when they were found together in a wolves’ den. However, it later discovered that they were not real sisters, but were abandoned or taken by wolves.

In 1920, Reverend Joseph Singh, a missionary in charge of an orphanage in Northern India, heard a news of two ghostly spirit figures seen accompanying a band of wolves near Midnapore in the Bengal jungle. The local villagers were scared of this news because their local custom forbids them to do any harm to the wolves. Singh built a place to hide in a treetop overlooking the lair of the wolf pack. As the moon rose at night, Singh saw the wolves come out from the jungle one by one. Then sticking their heads out briefly to sniff the night air came two hunched and horrible figures.

The girls seemed to have no trace of humanity in the way they acted and thought. It was as if they had the gene of wolves. They tore off any clothes put on them and would only feed on raw meat. They only wake up after the moon has risen and howled to be let free again. They had spent so long on all fours limbs, that their tendons and joints had become shortened to the extent that it was impossible for them to straighten their legs and even attempt to walk upright. They never smiled or showed any interest in humanity. The only expression on their faces was fear. Even their senses had become wolf-like. Their eyes were also supernaturally sharp at night and would glow in the dark like a cat’s.

Singh did his best to rehabilitate and train these two girls but he discovered that the wolf habits acquired by them had somehow barred the free expression of their innate human characteristics. Singh felt it was his job to wean the girls from their lupine ways and so allow their buried humanity to emerge.

Unfortunately, before his experiment had progressed far, Amala got sick and died. Kamala went into prolonged mourning and for a while, Singh feared for her life as well. But eventually, Kamala recovered and Singh started a patient programme of rehabilitation. Kamala survived until 1929 and spoke about 50 words. 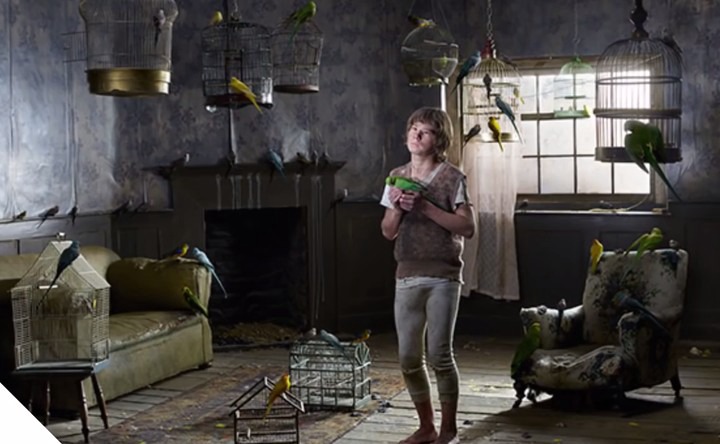 In 2008, Russian care workers rescued a seven-year-old “bird-boy” who could only communicate by “chirping” (a short, sharp or high note or noise, as of a bird) after his mother raised him in a virtual aviary, as reported. Authorities said that the abandoned child was found living in a tiny two-room apartment surrounded by cages containing dozens of birds, bird feed and droppings.

The so-called “bird-boy” did not understand any human language and communicates instead by chirping his arms. Social worker Galina Volskaya, who was involved in rescuing the child from his home in Kirovsky, Volgograd, said he was treated like another pet by his 31-year-old mother who never spoke to him. Galina Volskaya said: “When you start talking to him, he chirps.”

Russian authorities say the child was not physically harmed but is suffering from “Mowgli syndrome”, which is a syndrome named after the Jungle Book character raised by wild animals and cannot engage in any normal human communication.

The boy’s mother signed an abdication form to release the child into her care after he was discovered. He was then transferred to an asylum, but later soon was sent to the centre of psychological care. 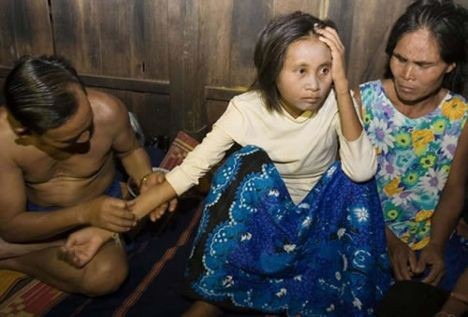 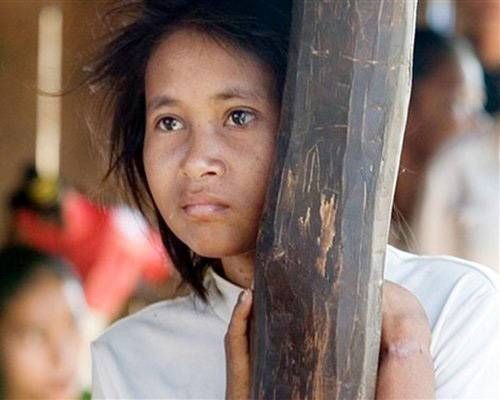 The Cambodian Jungle girl is a Cambodian woman who emerged from the jungle in Ratanakiri province, Cambodia on January 13, 2007. She was discovered when a family in a nearby village claimed that the woman was their daughter Rochom Pn’gieng (born 1979) age 29 or 30 who had disappeared 18 or 19 years previously. The story went viral as one of a feral child who lived in the jungle for most of her life.She came to international attention after appearing filthy, naked and scared from the dense jungle of Ratanakiri province in remote northeastern Cambodia on January 13, 2007.

This happened when a villager noticed that his food was missing from a lunch box, so he staked out the area, spotted the woman, gathered some friends and caught her.

She was recognised by her father, policeman Ksor Lu long, because of a family scar on her back. He said that Rochom P’ngieng was lost in the Cambodian jungle at the age of eight when herding buffalo with her six-year-old sister who also disappeared.

A week after she was discovered, she experienced difficulties adjusting to human life. Reports claimed that she was only able to say three words: “father”, “mother” and “stomachache”.

A Spanish psychologist who visited the girl reported that she “made some words and smiled in response to a game involving toy animals and a mirror” but did not speak any recognizable language. When she was thirsty or hungry, she pointed at her mouth. She preferred to crawl rather than walk upright. The family watched Rochom P’ngieng to make sure she did not run off back to the jungle, as she tried to do several times. Her mother constantly had to pull back on the clothes when she tried to pull them off. Later In May 2010, Rochom P’ngieng has fled back to the jungle. Despite the searching, they have not managed to recover her.