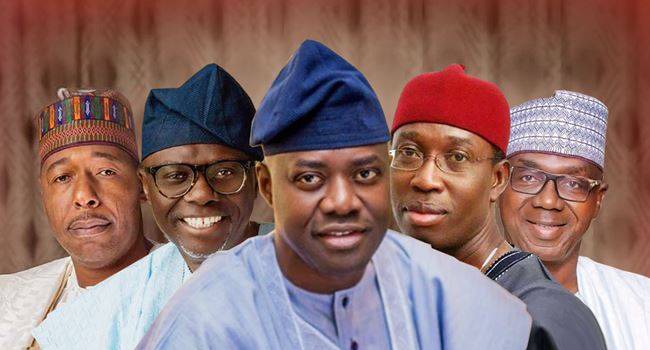 He was born 17th January, 1967. The richest not only in Northern Nigeria, but also in Africa.

Governor Sani Bello was born into a wealthy family before joining politics or occupying any public office. So we know his wealth is genuine which makes him the wealthiest state governor in Nigeria at the moment.

Nyesom Wike is the second richest governor in Nigeria and current governor of Rivers state, an oil producing state in the Niger Delta and south south area of Nigeria.

He is also among the PDP governors in Nigeria at the moment and succeeded Rotimi Amaechi in the state. He is also the best performing governor in Nigeria this year.

The third on the list of richest Nigerian state governors is Nasir El-Rufai who is the current Governor of Kaduna State. He was born on the 16th of February, 1960 in Katsina State and has been in politics for a very long time. He was even the former minister of the FCT before he was elected as governor of Kaduna. He is the most educated governor in Nigeria because of his qualifications from London and Havard University respectively.

Dapo Abiodun ranks fourth on this list of richest Nigerian governors and he is the incumbent governor of Ogun state. Dapo Abiodun net worth is said to be over $314 million as he is the CEO of Heydon Petroleum, a leading oil company in Nigeria.

Governor Willie Obiano is the current governor of Anambra State and ranks fifth richest governor in Nigeria this 2020. Willie Maduaburochukwu Obiano was already a millionaire business man before venturing into politics. He was also a professional banker who made his mark in the banking sector before becoming a governor.

Abdulfatai Ahmed is the incumbent Governor of Kwara State takes the number 6 spot on this top 10 list of the richest Governor in Nigeria at the moment. He was born on the 29th of January 1963 Share, Ifelodun Kwara State.

Godwin Obaseki of Edo state is another wealthy state governor in Nigeria. He is also one of the most educated state governors in the country with so many academic qualifications to his credit.

Governor Ganduje is the present governor of Kano State, and one of the richest governors in Nigeria 2020. He is a member of the ruling All Progressive Congress (APC).

Bala Mohammed is the current governor of Bauchi state and one time former Minister of Abuja. He is also a rich Nigerian governor.

Last on the list is Governor Seyi Makinde of Oyo State. Makinde is a businessman and also one of the richest politicians in Nigeria. He recently declared his assets as stipulated by the law to be worth N48 billion.