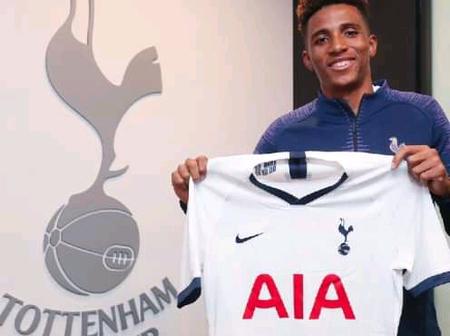 Tottenham are in talks to sign Cape Verde striker Ze Luis, 28, on loan from Porto. (Record – in Portuguese)

Inter Milan have agreed personal terms with Danish midfielder Christian Eriksen, 27, over a permanent move this month but Tottenham want the Italian side to double their bid of 10m euros. (Calciomercato – in Italian)

Uruguayan striker Edinson Cavani, 32, is also out of contract in the summer but Paris St-Germain have told Atletico Madrid to raise their offer of 10m euros to 30m. (Marca – in Spanish)

Arsenal are lining up a £6m move for PSG’s French left-back Layvin Kurzawa, 27, before he becomes a free agent in the summer. (Sun)

The Gunners and local rivals Tottenham are among five Premier League clubs chasing Getafe’s Togo centre-back Djene Dakonam, 28, for whom Monacohave already had a bid turned down. (Sun)

Spurs will face competition from Sevilla this month in a bid to land AC Milan’s Polish striker Krzysztof Piatek, 24. (Mail)

Barcelona are close to signing Brazilian midfielder Matheus Fernandes, 21, from Palmeiras for 7m euros, plus a potential 4m in add-ons. (Mundo Deportivo – in Spanish)

AC Milan’s Swiss full-back Ricardo Rodriguez, 27, has chosen to go out on loan to Fenerbahce rather than PSV Eindhoven, with a view to a permanent move for 6m euros. (Calciomercato – in Italian)

Southampton will not sell Che Adams this month as boss Ralph Hasenhuttl has ordered the board to keep the English striker, 23. (Express)

Former Chelsea and Tottenham manager Andre Villas-Boas has hinted he could leave Marseilleafter ex-West Ham and Sheffield Wednesday chief executive Paul Aldridge was appointed as a ‘special advisor’ without his knowledge. (Le Parisien – in French)

Rangers midfielder Greg Docherty, 23, would prefer to join Sunderland on loan for the remainder of the season rather than Charlton.